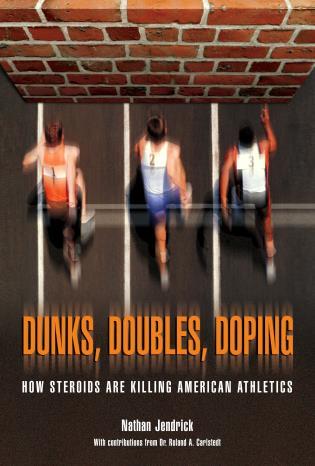 How Steroids Are Killing American Athletics

Steroids have been made out to be the modern plague of the day. The media chastize athletes who use them and sentence users to an early death. Outspoken critics claim there's a laundry list of horrific, irreversible side effects. But the truth, as HBO may have summed up best in their special programming on the subject, is that despite all the smoke, there's no fire. Hardly a spark.

In Dunks, Doubles, Doping, Nathan Jendrick offers a researched, unbiased view on anabolic steroids and other performance enhancing drugs. The truth is that steroids didn't kill Lyle Alzado, Steve Bechler or Ken Caminiti. The truth is that steroids won't be the cause of death for Mark McGwire, Barry Bonds, or Marion Jones--athletes accused of drug use. The one thing that steroids are killing though, is sports. Steroids have ruined the landscape of competition not by their chemical properties, but by the massive hysteria that surrounds them in the media, in gyms and in the stands of stadiums. And it's all in the name of money. Fans are turned off by the scandals and adolescents, who might be the only ones at a real health risk by using steroids, are putting the future of sports on their shoulders, and on the line, by trying to get big unnaturally too early.

Dunks, Doubles, Doping includes interviews with top athletes, physicians and personalities while covering and revealing the truth behind steroids and confronting the new horizon of cheating: Gene doping. 3D is a can't-miss if you want the truth behind America's latest sports scandal.

Nathan Jendrick is a freelance writer whose work has appeared in Swimming World and American Health and Fitness. He is also an amateur bodybuilder, competitive swimmer, and personal trainer, whose clients have included Megan Quann, the 2000 double-Olympic gold medal winner and world record holder, to whom he is married.