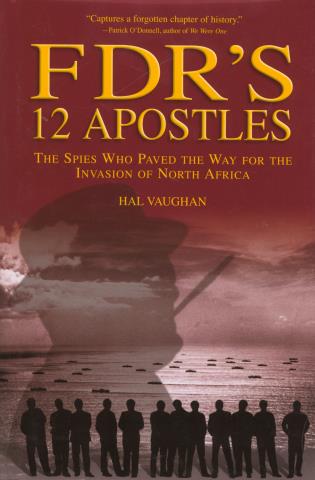 Nineteen months before the attack on Pearl Harbor, FDR sent twelve "vice
consuls" to Algeria, Morocco, and Tunisia on a secret mission. Their objective? To prepare the groundwork for what eventually became Operation TORCH, the Allied invasion of North Africa that repelled the Nazis and also enabled the liberation of Italy. This spy network included an ex-Cartier jewel salesman and wine merchant, a madcap Harvard anthropologist, a Parisian playboy who ran with Hemingway, ex-French Foreign Legionnaires and Paris bankers, and a WWI hero.
Based on recently declassified foreign records, as well as the memoirs of Ridgeway Brewster Knight (one of the twelve “apostles”), this fast-paced historical account gives the first behind-the-scenes look at FDR's top-secret plan. .

Hal Vaughan has served as a U.S. Ferign Service offer and journalist on assignments in Europe, the Middle East, and Southeast Asia. His first book was Dotor to the Renaissance: The Heroic True Story of an American Surgeon and His Family in Occupied Paris (Brassey's 2004).