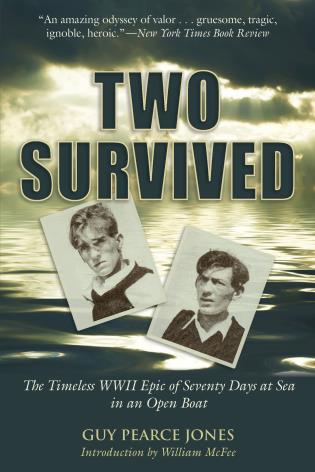 On August 21, 1940, a Nazi raider torpedoed the British merchantman Anglo-Saxon and machine-gunned the survivors as they tried to escape in their lifeboats. One little boat escaped with seven men. Five of them perished, but Robert Tapscott and Wilbert Widdicombe endured for seventy full days and 2,300 miles to landfall on the other side of the .

This is the incredible account of their ordeal, one of the most thrilling stories of the sea ever written—and one that almost never came to light. “It has seldom happened,” writes William McFee in the introduction, “that a narrative so circumstantial, so entirely stripped of all humbug and false sentiment, has come out of the depths of the sea, to inspire us with admiration for human valor.”

In the tradition of the Shackleton adventure and Nathaniel Philbrick's In the Heart of the Sea, Two Survived is an unforgettable true story of survival against the very longest odds.

Guy Pearce Jones was the editor-in-chief of the North American Newspaper Alliance and coauthor of Peabody's Mermaid and There Was a Little Man.

William McFee wrote several classics of the sea, including Harbourmaster and Casuals of the Sea.