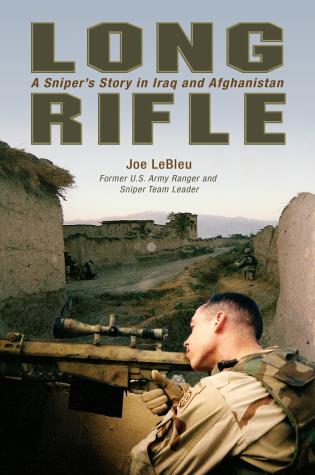 A Sniper's Story in Iraq and Afghanistan

When fires raged in the ruins of the World Trade Center on September 11, 2001, Joe LeBleu, a native of Brooklyn and a retired U.S. Army Ranger veteran, was in lower Manhattan. On that day he decided to return to active duty. By the time he received an honorable discharge as a Staff Sergeant, paratrooper, and sniper team leader in the 82nd Airborne Division in 2005, he’d become known as “Long Rifle”—for shooting an Iraqi insurgent at 1,100 meters in Fallujah in the fall of 2003. That single shot remains the farthest in Iraq by any American or British sniper.

This book tells his story.

Long Rifle is gripping and moving, but most of all, inspiring. As 9/11 altered the terrain of so many lives, it shaped that of Joe LeBleu: “Watching my city burn tore me up inside like nothing else in my life, ever.” Joe takes us with him from that haunting day in New York across the world, to the sweltering heat and ambush-rife conditions of desert and urban combat in Iraq. From here we enter a vastly different world: the remote and rugged mountains of Afghanistan. Joe’s accounts of sniper missions against the Taliban and Al Qaeda in this grueling landscape are engaging and intriguing. Finally, Joe trusts his gut and returns to civilian life, settling near Las Vegas and going on to train Mark Wahlberg for his role as a Force Recon Marine scout/sniper in the film, Shooter. Joe had come full circle from 9/11, “a day that changed my life forever.”

Raw, gritty, passionate, and provocative, Long Rifle is both the first memoir by a U.S. Army sniper from the 9/11 generation and a stirring testament to the core values of American soldiers: integrity, honor, and courage. LeBleu’s journey to war and back also testifies to the enduring power of love: Joe carried his dream to return to Natalie, his wife, for six long years.

Joe LeBleu is a former U.S. Army Ranger and 82nd Airborne sniper team leader. His fathers military service allowed him to grow up all over the world, he holds the record for the longest kill shot, 1,100 meters, in Fallujah, Iraq, in the fall of 2003. Now a civilian, he lives with his wife, Natalie, in Las Vegas, Nevada.