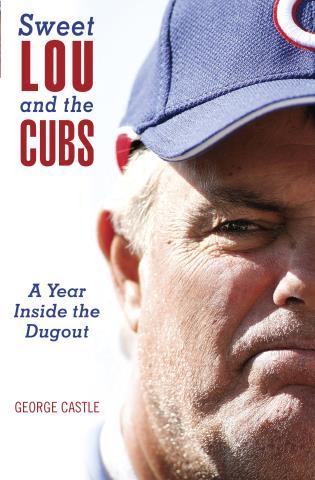 Sweet Lou and the Cubs

A Year Inside The Dugout

Sweet Lou and the Cubs chronicles from the inside-out Lou Piniella's stirring and celebrated quest to reverse the team's fortunes after a record 100 years without a World Series championship. Drawing on the story of Piniella's Cubs debut in 2007 and his history as baseball's ultimate firebrand, veteran Cubs reporter George Castle gives fans the real story behind the building of the best Cubs team in decades. In riveting detail he traces how the Cubs swept into the 2008 playoffs as the favorite to represent the National League in the World Series, but then went down in shocking defeat—leaving millions of fans to pin their wounded hopes on the prospects of their remade team finally turning the tide in 2009. . . .

This is sports writing at its best, focusing on Piniella's old-school style and baseball scientist's mind; wild swings in the Cubs' win-loss fortunes; the inside scoop on a Cubs' front office that has been dramatically more aggressive than its predecessors; the byplay of daily clubhouse life and profiles of key players; and Piniella's colorful proclamations and homespun philosophy, along with his interactions with his coaches, the team, ball-club executives, media, fans, and celebrity hangers-on.

George Castle has covered the Cubs and Major League Baseball since 1980 for a variety of newspapers and magazines, and for the Times of Northwest Indiana, the Chicago area's fourth-largest daily newspaper. An author of eight books, he hosts and produces a weekly syndicated baseball show, Diamond Gems, which is broadcast on 41 affiliates in 14 states and podcast on the YourSportsFan.com sports site. Castle has become a multimedia purveyor of Cubs inside information and analysis that has been unmatched, using a network of close clubhouse and front-office relationships to continually produce scoops and informative pieces that outflank other media. He has gotten to know—and gain the trust—of almost all of the important figures in the franchise, including Lou Piniella. Castle has also appeared on a wide variety of network radio—including ESPN, Sporting News, and Sirius—and local sports-talk radio programs. He was tapped by producers as one of the historical experts on the Cubs for Wait Til' Next Year: The Saga of the Chicago Cubs, the HBO 2006 special on the team. He lives in Chicago.