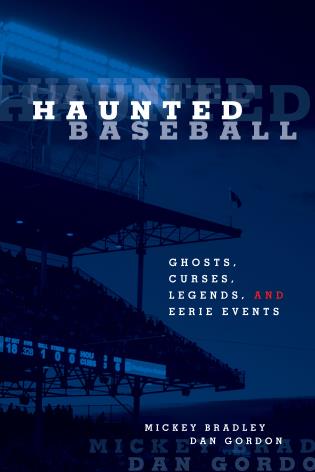 Baseball and ghost stories are as American as apple pie. Haunted Baseball combines both with this fun and freaky collection of otherworldly yarns. Collected from baseball players, stadium personnel, umpires, front-office folks, and fans, the tales told here explore the spooky connection between baseball and the paranormal, including Babe Ruth sightings at a former brothel, the Curse of the Billy Goat that still haunts the Chicago Cubs, of hidden passageways within the depths of Dodger Stadium, and of the spirits of legendary stars that inspire modern-day players at Yankee Stadium. We hear why Johnny Damon believes in ghosts, and how the memories of a 9/11 hero inspired Ken Griffey Jr. to hit a home run against the Phillies—a team against which he'd never even gotten a hit! There's the story of how Sam Rice settled a decades-old baseball controversy with a message from beyond the grave, and how the late Roberto Clemente had premonitions of his own death in a plane crash. With a wealth of anecdotes that have never before been told before, the authors present an entertaining and eerie look at our national pastime.

Mickey Bradley is a lifelong Yankee fan, named after the team's legendary center fielder. He has been working as a freelance writer for more than a decade, both in Manhattan and Upstate New York. His diverse body of work covers topics ranging from sports to science to humor to entertainment and includes ghostwritten books, corporate communications, magazine profiles, and dozens of video/film projects.
Dan Gordon first experienced the magic of Fenway in the summer of 1975 when his father took him to his first game. With a Thomas J. Watson Fellowship, Gordon studied global baseball culture in Japan, the Dominican Republic, Cuba and Nicaragua. His writings on baseball have appeared in numerous publications including the Providence Journal and Fort Worth Star and he is the author of Cape Encounters: Contemporary Cape Cod Ghost Stories (Cockle Cove Press, 2004). He lives and dies with the Red Sox.