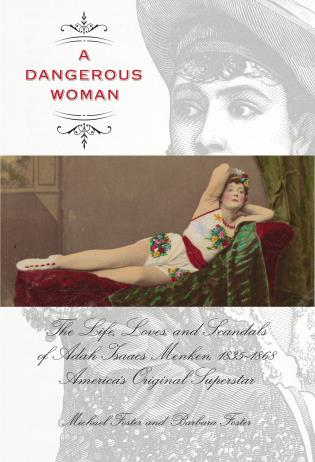 Marilyn Monroe might never have become the legend she did without America’s original tragic starlet: actress and poet Adah Isaacs Menken (1835–68). In a century remembered for Victorian restraint, Menken’s modern flair for action, scandal, and unpopular causes—especially that of the Jewish people—revolutionized show business. On stage, she was the first actress to bare all. Off stage, she originated the front-page scandal and became the world’s most highly paid actress—celebrated on Broadway, as well as in San Francisco, London, and Paris. At thirty-three, she mysteriously died.

A Dangerous Woman is the first book to tell Menken’s fascinating story. Born in New Orleans to a “kept woman of color” and to a father whose identity is debated, Menken eventually moved to the Midwest, where she became an outspoken protégé of the rabbi who founded Reform Judaism. In New York City, she became Walt Whitman’s disciple. During the Civil War she was arrested as a Confederate agent—and became America’s first pin-up superstar. Menken married and left five husbands. Ultimately, she paid dearly for success.

A major biography of a remarkable woman, A Dangerous Woman is must reading for those interested in women’s history, the roots of modern-day American Judaism, and African-American history.

Praise for a previous book by Barbara and Michael Foster, Forbidden Journey: The Life of Alexandra David-Neel

“Hers was a great human life, very well written up in Forbidden Journey. . . . Surely this biography will provoke even more interest.” —New York Times Book Review

Michael Foster, novelist, biographer, and historian, graduated from Cornell with honors in philosophy. He received an MFA from the Writer's Workshop, Iowa, attended Harvard Law School, and did extensive graduate study and taught at NYU. His first novel, Freedom's Thunder (Avon, 1980), was praised by Nobel laureate Isaac B. Singer. His writing style has been described by Entertainment Weekly as “racy and engaging.” Michael is producer and writer of a DVD shot in New York's Chinatown: Asian Health Secrets. Barbara Foster, Assoc. Prof. at CUNY, specializing in Women's Studies, has co-authored three trade books. She has published many articles on education and travel and 200 poems in journals in various countries. Barbara is a referee for the Royal Geographical Society. She lectures often in the U.S. and abroad and has packed auditoriums from Washington's Smithsonian to Cal Tech, Sidney, Buenos Aires, and Prague. She recently gave seminars at Skidmore and Trinity colleges. She has been selected as a Speaker (on Menken) by the NY State Council on the Humanities. Barbara appears on TV, radio, and in print/Net interviews. Joint publications of the Fosters also include Forbidden Journey (Harper, '89), a classic of adventure travel; Three In Love (Harper, '97), the history of the romantic triangle. Praised by Entertainment Weekly, The Washington Post, and Bookwoman, Three In Love has been published in German, Polish, Spanish, Portuguese, Korean, and Turkish. They have given over 100 slide talks worldwide, including highly applauded slide talks on Adah Menken at Yale Drama School, libraries and synagogues. They plan an extensive tour of the Menken show, with its spectacular photos. The Fosters have sold previous movie options and treatments to Columbia Pictures and directors Carroll Ballard and Brian Gibson, and they remain involved in bringing their biographies to the big screen.