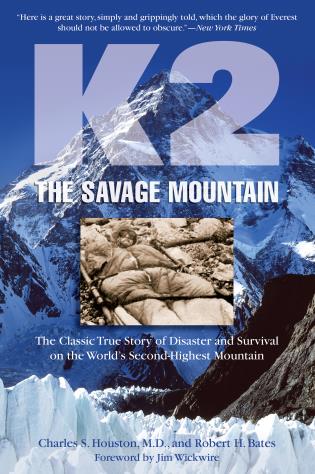 When eleven climbers died on K2 on August 1, 2008, it was a stark reminder that the world's second-highest mountain has, for more than a century, been regarded as the most difficult and dangerous of all—for every four people who reach the top, one dies in the attempt. K2, The Savage Mountain tells the dramatic story of the 1953 American expedition, led by Charles S. Houston, when a combination of terrible storms and illness stopped the team short of the 28,251-foot summit. Then on the descent, tragedy struck, and how the climbers made it back to safety is renowned in the annals of climbing.

K2, The Savage Mountain captures this sensational tale with an unmatched power that has earned this book its place as one of the classics of mountaineering literature.

Charles Houston and Robert Bates organized the American expeditions to K2 in 1938 and 1953. Houston, a doctor of internal medicine, taught at the University of Vermont. Bates, a past president of the American Alpine Club, received his doctorate in English and taught at Phillips Exeter Academy.