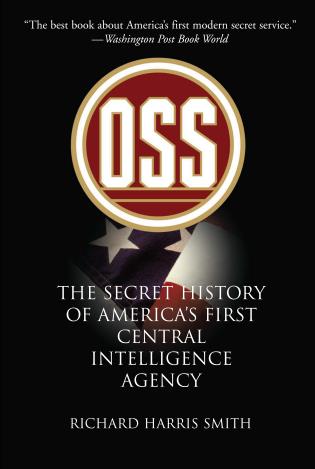 In the months before World War II, FDR prepared the country for conflict with Germany and Japan by reshuffling various government agencies to create the Office of Strategic Services--America’s first intelligence agency and the direct precursor to the CIA. When he charged William (“Wild Bill”) Donovan, a successful Wall Street lawyer and Wilkie Republican, to head up the office, the die was set for some of the most fantastic and fascinating operations the U.S. government has ever conducted. Author Richard Harris Smith, himself an ex-CIA hand, documents the controversial agency from its conception as a spin-off of the Office of the Coordinator for Information to its demise under Harry Truman and reconfiguration as the CIA.
During his tenure, Donovan oversaw a chaotic cast of some ten thousand agents drawn from the most conservative financial scions to the country’s most idealistic New Deal true believers. Together they usurped the roles of government agencies both foreign and domestic, concocted unbelievably complicated conspiracies, and fought the good fight against the Axis powers of Germany and Japan. For example, when OSS operatives stole vital military codebooks from the Japanese embassy in Portugal, the operation was considered a success. But the success turned into a flop as the Japanese discovered what had happened, and hastily
changed a code that had already been decrypted by the U.S. Navy.
Colorful personalities and truly priceless anecdotes abound in what may
arguably be called the most authoritative work on the subject.

Richard Harris Smith began writing this history of the OSS after resigning from the CIA in 1968. He now deals in rare and antique American books and lives with his daughter in California.