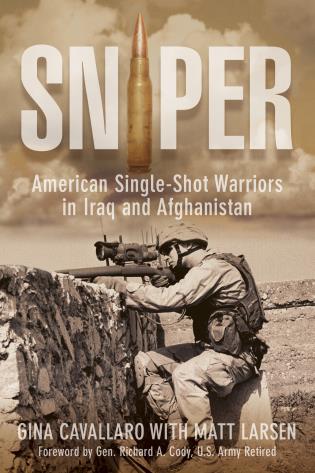 From Afghanistan’s Hindu Kush peaks and sunbaked Helmand Valley to Baghdad, Mosul, and Ramadi in Iraq, American snipers have braved heart-pounding situations to hit their human targets dead-on. Few military feats stir the imagination like the image of a pair of riflemen waiting quietly in a building, a bomb crater, or a mountain pass for a Taliban or Al Qaeda fighter to walk into their crosshairs.

Sniper presents real-life tales from the military’s frontline snipers—their hits and their misses, the anguish of loss, and the anxiety of the first kill. Authors Gina Cavallaro and Matt Larsen provide riveting accounts of American soldiers and marines on the battlefield, and take a rare look at how Rangers and Special Forces snipers train and operate, and how the war on terror has changed the role of military snipers.

Gina Cavallaro is one of America's most experienced war correspondents. She has traveled to every corner of today's war zones and walked the dangerous streets with the troops to tell their real stories of life on the ground in America's most protracted conflict since the Vietnam War. She is a writer for Army Times.

Matt Larsen, a longtime trainer in hand-to-hand combat and survival techniques, served as a sniper in the U.S. Marine Corps and the Army Rangers during the course of a twenty-two-year career in the military. He recently revised and updated the U.S. Army Survival Handbook (Lyons). He is the Director of the Modern Army Combatives Program, which he created, and the Commandant of the U.S. Army Combatives School, which he founded at Fort Benning, Georgia.