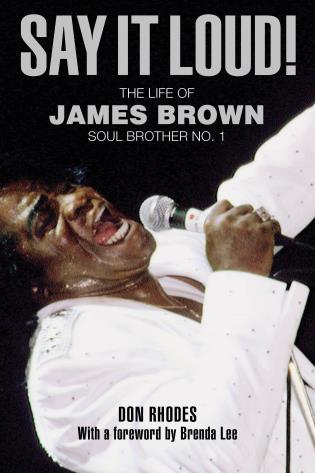 The Life of James Brown, Soul Brother No. 1

When Don Rhodes took his seat not far behind Michael Jackson at the funeral of the “Godfather of Soul” on December 30, 2006, it marked the close of a forty-year friendship. In Say It Loud! Rhodes pays tribute to James Brown and his storied career, with a close and comprehensive look at the life of the legendary singer at his home in Augusta, Georgia, and the family he left behind.

From the evolution of Brown's fiery, uniquely rhythmic musical style to his social activism, world travels, run-ins with the law, and four marriages (and uncertain number of affairs), Rhodes provides a sensitive but candid look at the life of the man behind such hits as “I Feel Good,” “Please, Please, Please,” “Sex Machine,” and “Say It Loud—I'm Black and I'm Proud.” He takes us back to the 1960s, when James Brown and other American soul and rock artists were relieved to find that they had nothing to fear from the Beatles and other British artists taking America by storm—indeed, as some of the Brits acknowledged, the Americans had inspired them. Mick Jagger, whose dance steps were influenced by Brown, once said of him, “His show didn't just have to do with the artist but had to do with the audience. . . . Their reaction was always . . . like being in a church.” Unlike his friend Elvis Presley, James Brown went on to be a frequent global traveler, adored by fans throughout the world.

Say It Loud! bears out the reputation of the man with the famous cape as “the hardest-working man in show business,” bringing us the full story of a conscientious performer and consummate professional with a fascinating and controversial personal life. Never-before-published photos, as well as anecdotes from an enduring friendship and details of Brown's life at home, will further ensure that music fans of all ages will cherish this tribute to an American icon by a longtime friend.

Don “Ramblin” Rhodes is the author of Ty Cobb: Safe At Home (Lyons Press), Entertainment in Augusta & the CSRA, and of the Chronicle's regular column Ramblin Rhodes, the longest running country music column in . He has been nominated several times to the Georgia Music Hall of Fame in the non-performer category. He lives in .