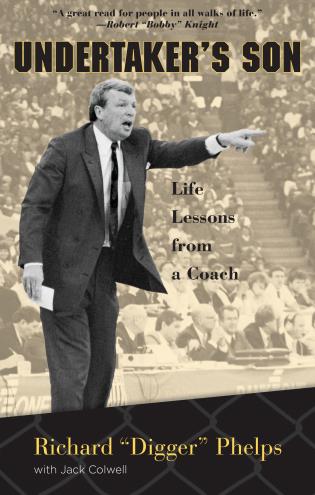 Life Lessons from a Coach

Head basketball coach of Notre Dame at age 29, a position he held for more than two decades with a 100 percent graduation rate, an attention-getting figure in President George H. W. Bush's anti-drug program, part-time ambassador, a nationally adored ESPN commentator, and a possible Presidential candidate, Richard “Digger” Phelps has done it all. Undertaker's Son is an eminently readable, inspirational, account of how he rose from an unmotivated student in small-town Beacon, New York, to a nationally known figure who attracts attention wherever he goes. One lesson: Do it today, for tomorrow might not come—a hard lesson he learned while apprenticing at his father's funeral home. In Undertaker's Son, the irrepressible Phelps gives advice that really matters, whether it's how to get getting ahead in business, make the right decision, or plan for the future. Here also is Phelps's plan for a better America in these contentious times. Brutally honest, inspirational and often humorous, Phelps's message will appeal to anyone seeking an edge in business or life.
This is the perfect gift for anyone who loves a turnaround story.

The nickname "Digger" derives from his birthplace of Beacon, New York, where his father owned a funeral service.

He began his coaching career in 1963 as a graduate assistant at Rider College, where he had played basketball. After a move to the high school ranks, he got his first full assistant job in 1966 at the University of Pennsylvania. His first head coaching job came in 1970 at Fordham University; after leading the Rams to a 26-3 record in the 1970-71 season, he was named head coach at the University of Notre Dame.

After retiring from coaching, he briefly worked for the Office of National Drug Control Policy, and also served as an observer in the 1993 elections in Cambodia. His broadcasting career began in 1993, when he did color commentary for that year's NCAA tournament for CBS. He joined ESPN the next season.